For those looking for an LL.M., Germany is a great place in which to forge or further a law career. It’s Europe’s largest economy and holds significant economic and political influence among EU countries, and beyond. This means employment prospects can be excellent, with the country’s economy and job market currently booming. Another perk for international students is the ease with which they can secure study and work visas in Germany, an open, tolerant nation that embraces and values foreign talent.

Fortunately, there’s a plethora of world-class law schools in the country, some of which have been around for centuries. And for international students seeking to study in the country, the good thing is that an increasing number of German law schools are offering LL.M. programs, in topics from business law to European law and more.

See the top 10 law schools in Germany below.

Ludwig-Maximilians-Universität München, founded in 1472 in the heart of Munich in Bavaria, is considered one of Europe’s leading academic and research institutions. Top Universities rates it highly for law, with the school offering a broad range of respected LL.M. courses such as the LL.M. in German Law and a program focused on European and International Economic law.

It is one of the oldest universities in Berlin, suggesting enduring quality. The law school has the LL.M. in European Governance and Administration, as well as several other well-regarded programs. Among them are the LL.M. in Intangible Property Rights and Media Law; the International Dispute Resolution LL.M; and the German and European Law and Legal Practice program. The school is ranked among the top 50 best institutions for law globally by Top Universities. Berlin itself is a perk, both for the plethora of companies and closeness to important legal institutions, as well as for the social scene.

Bucerius Law School is considered to be one of Germany’s elite “Ivy League” law institutions. The school offers an LL.M. focused on business. The program is highly customizable, allowing students to deepen their knowledge in many different facets of law and business, including entrepreneurship, legal technology and operations, skills that put graduates in high demand among a wide array of employers, from banks to NGOs.

About midway between Frankfurt and Stuttgart lies Germany’s oldest university: Heidelberg University. Established in 1386, the school’s Faculty of Law has been in existence for as long as the university has. The university offers German-language LL.M. programs in German Law and Corporate Restructuring, as well as a novel LL.M. in International Law which the schools runs out of Santiago, Chile.

Founded in 1818, the University of Bonn has a long history of research and teaching. In terms of law, the school produces a range of research in topics such as canon law, public law, and German, European, and International Family Law, among other topics. The school offers a German-language LL.M. in German Law. Bonn is situated on the Rhine river in the country’s west, and is notable as being the birthplace of Ludwig van Beethoven.

Established in 1457 by the Hapsburg dynasty, the University of Freiburg is one of Germany’s oldest universities. In recent years, the Freiburg’s Faculty of Law has been well-ranked by many Germany-specific rankings, such as the CHE Ranking from news publication Die Zeit. The school offers a German-language LL.M., which is aimed at foreign lawyers who want to learn about German law. Freiburg is located in Germany’s Black Forest, and features a medieval old town and many historical buildings.

The Institute for German and European Business, Competition and Regulatory Law, at Freie Universität Berlin, is considered one of Germany’s Universities of Excellence, thanks to its acclaimed global reputation and commitment to social responsibility. The law school is also known for cross-disciplinary learning, with its prestigious LL.M. program combining aspects of competition, international contract, trade, and regulatory law. It’s a well-rounded education that can make you more employable.

The University of Cologne is ranked well by Top Universities. The school has a few LL.M. options on offer: the LL.M. for lawyers with a foreign law degree, the general LL.M. (taught in English and German) and an LL.M. specifically for Corporate Tax Law. Cologne is one of Germany’s cultural hubs, home to medieval architecture and famous river views, along with renowned art museums.

The University of Münster is one of Germany’s largest, and the law school draws an enormous pool of high quality talent from around the world to its generalist LL.M. degree. Partnerships with other universities mean there are a plethora of exchange opportunities. It’s a beautiful place to study too, close to the medieval city centre and part of a university cluster known as “Euregio” that is famed for its great many cycle lanes. In sum, it’s a high quality of life. 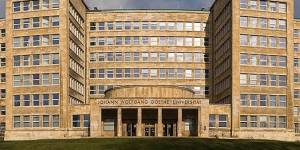 Goethe University Frankfurt is ranked among the world’s best law schools by Times Higher Education, a respected rankings provider. Goethe offers a welter of highly-regarded LL.M. degrees. These include the LL.M. in Finance, LL.M. in International Finance, and LL.M in European and International Economic Law. Studying in Frankfurt, an international financial metropolis, offers students stellar career prospects and a wide range of cultural activities.

Master of Law and Business (MLB) in Germany

University of Colorado at Boulder