How Many Big Law Associates and Partners Have an LL.M.?

LLM GUIDE surveys over 20,000 Big Law employees to find out how many have LL.Ms. and where they work

In 2010, we published an article about how many Big Law partners have an LL.M. We have now followed this up with a more extensive survey of how many lawyers in some of the world's largest law firms have LL.M. degrees. This time, we expanded our view beyond partners to also include associates, counsels, and consultants.

Of the 20,000 profiles we looked at, some 12,968 worked in offices outside the United States and the United Kingdom. As with our first survey, we focused on this group, recognizing that fewer US- and UK-based lawyers who work in Big Law firms have an LL.M. In Big Law firms in the US, a LL.M. is generally not considered an advantage, except in specialzed fields like tax law. Instead, our survey better depicts the situation in Big Law offices in hubs like Paris, Frankfurt, Stockholm, Amsterdam, Tokyo, Hong Kong, and Johannesburg.

In these places, we find that an average of 19 percent (but up to 43 percent) of lawyers in these firms have pursued an LL.M. 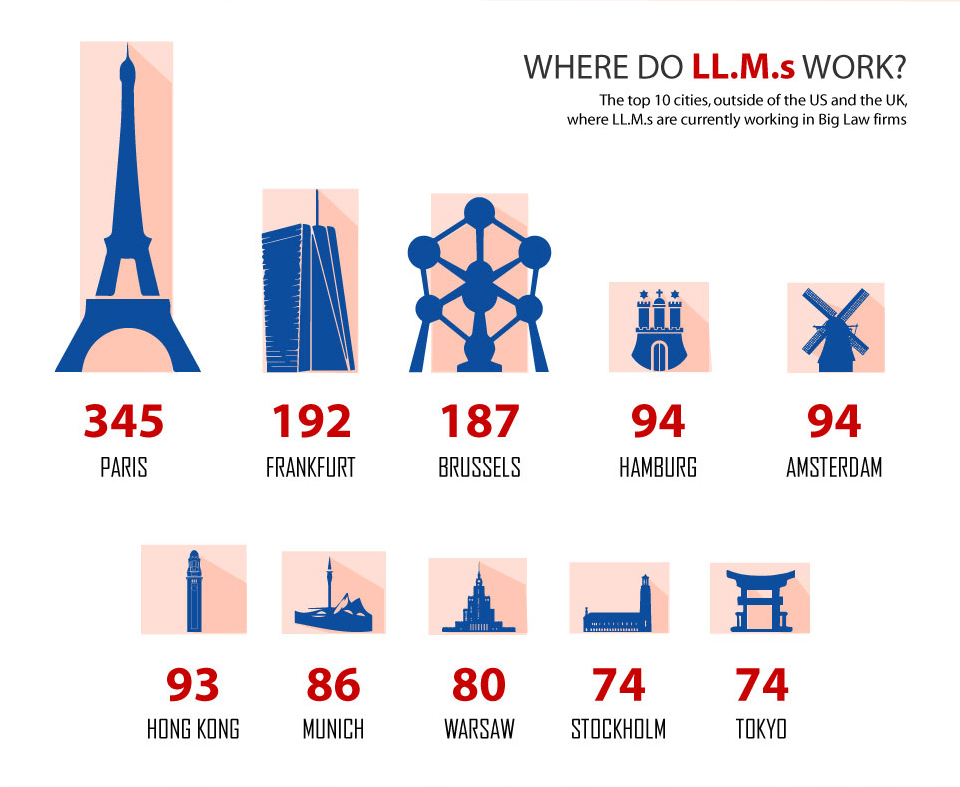 Where is an LL.M. valuable?

Many of these Big Law employees presumably used an LL.M. to get a better understanding of international law, specialize, prove their Legal English, and improve their profiles with a prestigious law school (and possibly a bar qualification, too).

Some use an LL.M. to bridge the gap between their undergraduate education and the requirements of working in a law firm. Leo Rifkind, after being offered a trainee position in Skadden’s London office, decided he needed an LL.M. from Berkeley to round out his profile before starting.

“I thought it would be good to get some experience in US law and international areas that you just don't study in your undergrad,” Rifkind says.

“So I pitched that to Skadden, because in London we do a lot of international arbitration, and most of the matters tend to be multi-jurisdictional in any case.”

“They said that that would be very useful and would add value to the firm.”

Rifkind started at Skadden last August, and has found that the LL.M. provided “a nice bridge between your undergrad and your working life.”

Most law firms don’t require LL.M.s when hiring. However, they can be valuable for those who want to climb the career ladder in international-facing law firms outside the US and the UK. For instance, although Germany’s Hengeler Mueller does not actively look for LL.M.s when hiring, the firm does have a formal requirement “that our associates must have spent about one year or so in an English speaking country in some professional environment before he or she is up for partnership,” according to Joachim Rosengarten, a partner at the firm.

“Having an LL.M. is one way to fulfill such criteria.”

Indeed, for many lawyers from non-English speaking countries, this international experience is an important facet of the LL.M. experience. For these students, especially if they want to go back to their home countries after graduation, “they then have a better chance of getting into the very best law firms in their countries,” according to Alexander Türk, the director of postgraduate taught programs at King’s College London.

“And here the LL.M. is perceived as a great help.”

See the infographic summarizing the most interesting results of the survey, including which Big Law firms hire LL.M.s, where LL.M.s work, and which law schools are best represented among Big Law firms.

Before we get to the results, it's also worth noting that law firms do not consistently publish the educational backgrounds of their employees online. This impacted our selection of which Big Law firms to examine, but also likely impacted the statistics; when no LL.M. is mentioned on a lawyer's online profile, we assume they do not have one, which might not always be the case.

Some findings from our survey: 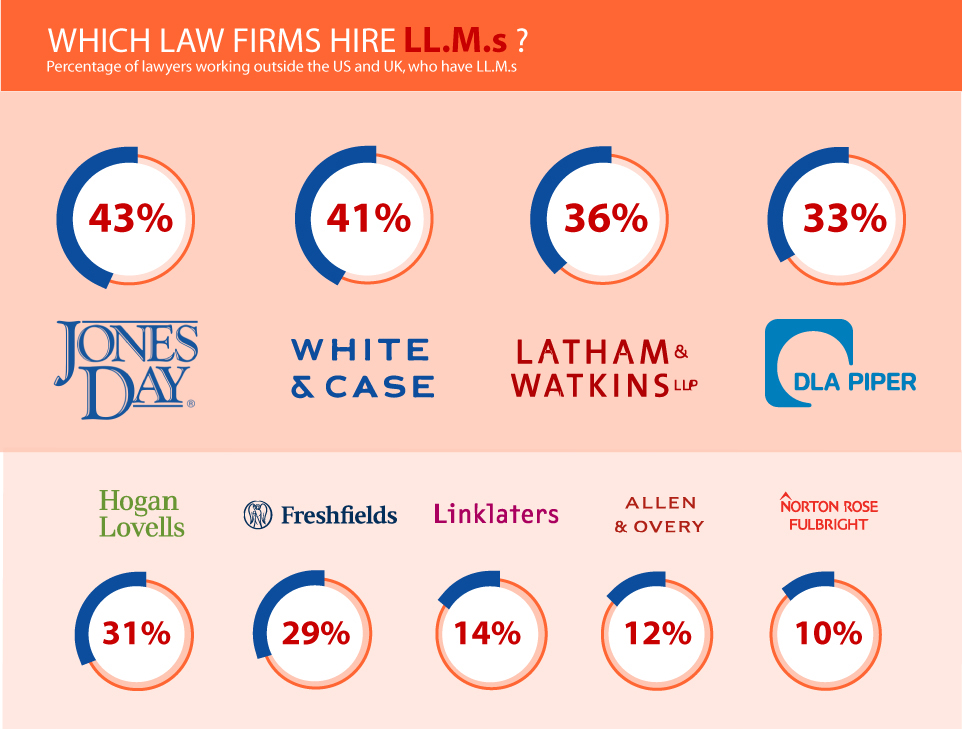 - Among the firms we examined, the firm with the highest percentage of LL.M. alumni working at their offices outside of the US and UK is Jones Day (with 43%).

- Not surprisingly, most LL.M. alumni in Big Law firms are working in the areas of Corporate Law (582 alumni) and Banking & Finance (405). Other common areas include Litigation & Arbitration (202), Competition Law (175), and Technology and Intellectual Property Law (109).

Unfortunately, most LL.M. programs do not publish employment data about their recent graduates. Unlike business schools, which track and publish the employment and salaries of their MBA alumni, law schools typically do not do the same for their LL.M. graduates.

There could be several reasons for this. For starters, collecting employment data is a big undertaking, and perhaps even more daunting for graduates who mostly leave the country after finishing the program. Also, the American Bar Association (ABA) does not collect LL.M. employment information as they do for JD programs. Nor are there any published rankings of LL.M. programs that rely on employment data as a criteria. And finally, critics of LL.M. programs might suggest that the lack of data is not a mistake, but rather a mask of the fact that earning an LL.M. doesn't pay.

Whatever the reasons, we here at LLM GUIDE encourage more law schools to publish information about the employment outcomes for their LL.M. graduates. Big Law is just one career avenue open to LL.M. graduates, and while this is by no means a methodologically complex or ironclad survey, we see it as a small contribution to employment-relevant data for prospective LL.M. students.

- To work in a Big Law firm in the US, an LL.M. is generally not seen as an advantage, except for those who want to work in fields where highly specialized knowledge is necessary (e.g. tax law.) Many who do an LL.M. from a top US school, however, find that just the school name can add value to their CV.

- For those aiming for Big Law jobs in non-English speaking countries, an LL.M. can be valuable for the international experience it provides. A good command of legal English and exposure to facets of international law can go a long way in international-facing law firms in countries like France and Germany.

- An LL.M. can also be an advantage for associates already working in Big Law who want to make partner. 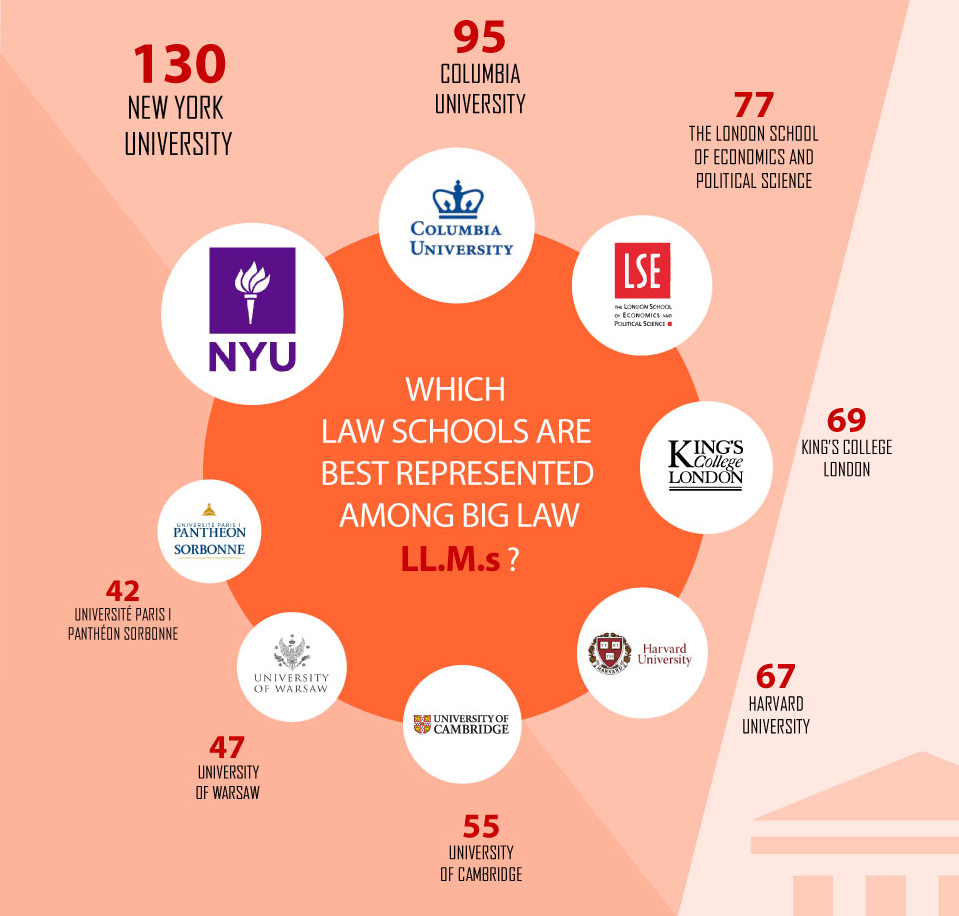 See List
Related Discussions
Soft Skills: How to Future-Proof a Career in Law