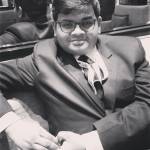 Entrepreneur, Law Student, Graphic Artist, Event Manager and Guitarist are the keywords which define my identity.

As a rhapsodic Law student, Founder of Lawrator and an Executive Committee Member of Indian National Bar Association, my focus has always been on whetting my skills and knowledge. Winning Lex Bonanza and participation in Lex Infinitum (Int. Mediation Competition), Lex Novitas Moot Court Competition Goa and others have contributed in augmenting my advocacy and oratory skills. Adding to them I have attended certification workshops in Mediation Techniques, Contract Drafting, Human Rights, Right to Information Act and Criminal Psychology.

On the creative quotient, dramatics, creative writing and guitaring haven been my forte and have helped me in bagging lots of prizes. I was bestowed with the title of Mr. Fresher Bangalore in an event organized by Radio Mirchi in association with Big Bazzar. I have been winning the best personality of the college award from past two years in ‘Spandan’- The intra-collegiate festival of KLE Society’s Law College.

Exploring the Management Skills, I have been organizing the Annual Cultural Fest “Ad Infinitum” of KLE Society’s Law College from past two years and have been in a Core Committee member. I have been the Student Head of the Career Guidance Cell (MENTOR) and International Relations Office of the college, where in I have been organizing placement drives and seminars in the campus. Lately, I was even in the Management Committee of Louis M Brown International Client Consultation Competition hosted by KLE Society's Law College.

Social Service has been the pièce de résistance of my life’s itinerary and hence I have done numerous public services under National Service Scheme and have supported multiple NGOs in their chores.

With the dream of becoming a Corporate Lawyer, I have started my journey of a thousand miles with a single step...

University of Malaya - Faculty of Law

The University of Western Australia (UWA)